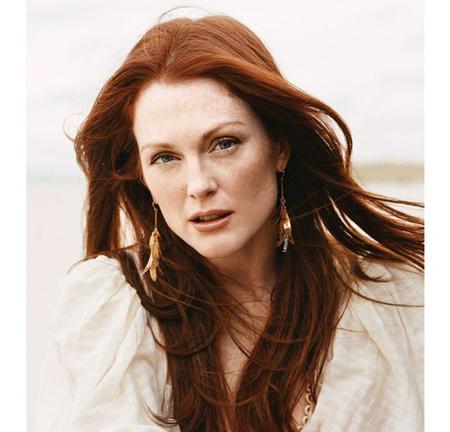 Julianne Moore made her Broadway debut in the world premiere of David Hare's play The Vertical Hour. The production, directed by Sam Mendes and co-starring Bill Nighy, opened in November 2006. Moore played the role of Nadia, a former war correspondent who finds her views on the 2003 invasion of Iraq challenged.  Off-Broadway credits include Ice Cream with Hot Fudge and Serious Money.

In addition to her Broadway and Off-Broadway work she has gained worldwide acclaim for her roles in major motion pictures often in roles that are "human, recognizable and emotional" portraying characters who are not always "perfect, heroic or in control".  Julianne Moore is an Academy Award nominated actress for her performances in Boogie Nights, The End of the Affair, The Hours and Far From Heaven.  She won Best Actress in 2015 for her role in Still Alice.  She also made unforgettable contributions in the films Short Cuts, The Kids Are All Right, A Single Man, Magnolia, The Hunger Games: Mockingjay (Parts 1 & 2), Crazy, Stupid, Love, The Lost World: Jurassic Park, Hannibal, Nine Months, Carrie, The Forgotten and Wonderstruck.

Alongside her acting work, Moore has established a career as a children's author. Her first book, Freckleface Strawberry, was published in October 2007 and became a New York Times Best Seller. Described by Time Out as a "simple, sweet and semi-autobiographical narrative", it tells the story of a girl who wishes to be rid of her freckles but eventually accepts them. Moore decided to write the book when her young son began disliking aspects of his appearance; she was reminded of her own childhood, when she was teased for having freckles and called "Freckleface Strawberry" by other children.

Freckle face Strawberry has been adapted into a musical, written by Rose Caiola and Gary Kupper, which premiered at the New World Stages, New York, in October 2010. Moore had an input in the production, particularly through requesting that it retain the book's young target audience. The show has since been licensed and performed at several venues, which she calls "extremely gratifying and extremely flattering".

Moore has written one children's book separate from the Freckleface Strawberry series. Released in 2013, My Mom is a Foreigner, But Not to Me is based on her experiences of growing up with a mother from another country.