At first glance it may seem as though inviting drag legend Charles Busch - who penned Vampire Lesbians of Sodom, Psycho Beach Party and Die, Mommie, Die! - to spend an afternoon with my first grade students was an odd choice.  But, thank goodness for second glances and looking beyond the surface to the man behind the flawless makeup.  In that lucid realm, it becomes immediately apparent that Charles Busch is an inspired addition to Broadway Books First Class.

Besides, what is more quintessentially New York than showcasing a performer who created a path in the rough-and-tumble world of theater by surrounding himself with kindred spirits while relying on his talent and determination.  Cooperation and perseverance are qualities educators nurture in school-aged children.

My team teacher Oni and I couldn't wait to introduce the children to Charles and his work.  So, one morning a week before his visit we projected a photograph of him onto our SmartBoard.  We first discussed Charles as a writer and made connections to the writing we do every day.  We discussed scripts and did a little role playing with two characters I created. The boys and girls slipped between the characters without regard for gender. Boys happily played the girl part and vice versa.

Next, we told the children that Charles often performs in his own shows playing the woman's role.  To provide the visual we unveiled a very glamours shot of Charles in costume and prepared for their reaction.

Here was a moment when you realize, once again, that prejudice against those outside of our everyday purview must be carefully taught.  After an initial reaction of awesome wonder their shock melted away.  The first comment when asked what they thought about his alter ego was to point out that he had a digraph in his first AND last name.

Over the next several days the kids came up with some questions for Mr. Busch.

Did you like to act and write when you were little?
What kinds of books do you like to read?
How are your acting and writing connected?
How often do you dress like a girl and how do you do it?

He answered all of these with a striking honesty that showed a vulnerability and a willingness to step outside of his comfort zone to open up to a group of children.  During his time with us he shared that he  had a "rather lonely childhood and always felt different from the other kids".  (I wonder how many of the students in our class also feel different, lonely, or outside the boundaries of what is typical.)  Charles said he found his voice in theater surrounded by others who had similar experiences growing up.

It's a good thing for all of us that he did!  His reading of The Spider and the Fly was a joy to behold. I couldn't help but feel I had a front row seat to a standing room only performance right there in my own classroom. 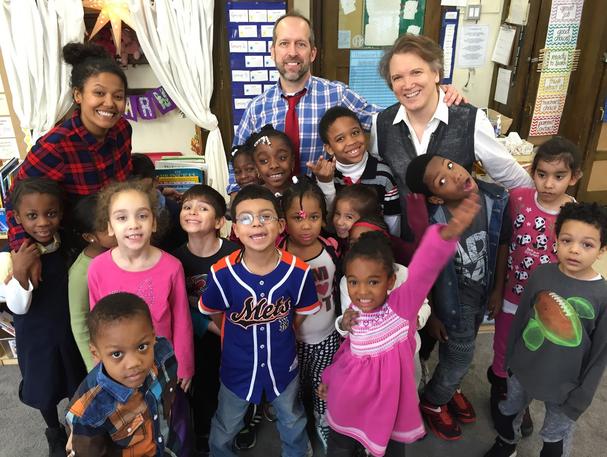 A Visit with Charles Busch