Broadway Books First Class did not spring to life fully formed like the Greek goddess Aphrodite. The seeds of its creation were planted over many years and when the program finally saw the sun in 2015 it had already grown roots.

I credit one encounter with Michael Urie on the night of March 23, 2009 as the first of these.  I had gone to see Celebrity Autobiography at The Triad NYC.  The show was created by my friend - and fellow Linda Ronstadt fan - Eugene Pack.  As Gene's guest I had an opportunity to mingle a bit with the performers. The show has a rotating performing company and Michael Urie was on the bill that night.  His combination of talent, easy charm and boyish good looks is hard to resist.

So, after the show I spoke with Michael and said, "If you ever want to come and read a book to my class let me know".  He said, "Sure" and we both went on our merry ways.  Never mind that we didn't exchange contact information. The invitation was out there - only to sit dormant for the next 8 years!

During that time I worked on my doctoral degree and Michael's star continued to rise. After I graduated I thought back to that night and realized I needed to make coming to my classroom to read a thing. It needed a name, an identity, a structure, a cute little dancing book logo! Once those things were in place the program would have some validity and therefore an invitation would have some immediate follow-through.

When the program was up and running I relied on my network of friends to see if anyone had contact information for Michael. Lo and behold, someone did and a plan was set in motion.

Michael, luckily, was still on board.  It turns out he was the final guest artist of Year Two, visiting just one day before the end of the school year.  He stepped into a very relaxed, light-hearted atmosphere, which was a fantastic fit for the children's book he read.

I chose a postmodern picture book entitled Snappsy the Alligator: Did Not Ask to Be in This Book! by Julie Falatko and Tim Miller for Michael because, first of all, the name SNAPPSY is ridiculously fun for an alligator.  Also, the main character (Snappsy) is a bit...gleefully dramatic. And I knew Michael would infuse his characterization of Snappsy with the appropriate cheekiness.  He didn't disappoint. He pulled the children into it as well, eliciting feedback, answering questions, encouraging them to dance like chickens (as one does).

The book is setup as a dialogue between Snappsy and the narrator.  At one point Snappsy is arguing with the narrator and tells him to "buzz off!" A surprised student then called out, "Wow! He's being mean to a Broadway actor? Seriously?!" Without missing a beat Michael good-naturedly responded with mock indignity, "I know! He doesn't even know who I am".  It was an incredibly active and interactive reading - thank goodness he is great with children.

Michael is starring in The Government Inspector at The Red Bull Theater with another Broadway Books First Class guest artist, Mary Testa. The show is a silly romp of mistaken identity with Michael cast as a vain ne'er do well pulling the wool over the eyes of a gullible town.  It is an over-the-top, giddy, joyful performance.  I attended one evening after school and returned to class eager to share his antics with my students.

We got a lot of play with Michael's opening bit. His character, Ivan Alexandreyevich Hlestakov, is bemoaning his sad state and attempts to end it all when he spots his reflection in the mirror and is quickly enamored by what he sees.  A series of poses and sly smiles follow until a twist of fate occurs and things start looking up.

That moment, in Michael's hands, was deliciously enchanting so I acted it all out for the children. They responded in kind and when Michael visited he recreated the moment and gave a little lesson on the finer points of self-admiration.

In addition to theater - we also found out his favorite show to perform in on Broadway thus far was How to Succeed in Business Without Really Trying where he played the role of Bud Frump opposite Nick Jonas - we talked about books!

He told us his favorite book is Oh, the Places You'll Go! by Dr. Seuss because it is a book that resonates differently for him at various times throughout his life. We made the connection to our classroom lessons here by stressing the point that you can read something more than once and each time you do there is an opportunity to catch something you didn't notice previously.

Emerging readers know this. A two-to-four-year-old will ask a parent to read the same book again and again but it's a slightly different story with beginning readers. This has to do with the shift that takes place between listening to books and actually doing the work of lifting the words off the page themselves. It is more complicated than that, obviously, but little reminders of the joys of literary discovery are always a good and welcome message.

To that end, students were given copies of SNAPPSY, signed by Michael.  The mission of Broadway Books Fist Class is to celebrate the Arts and promote literacy. Providing books for the children to read at home after a guest artist visit encourages interaction and excitement for reading. Parents tell me it works! Books are shared and read aloud and given a place of honor on bookshelves and nightstands. Establishing enjoyment around literacy events and good memories of time spent with the written word promotes a love of reading.

Thank you Michael Urie for ushering out Year Two with a story, a laugh, and a well-mannered pose!

A Visit with Michael Urie 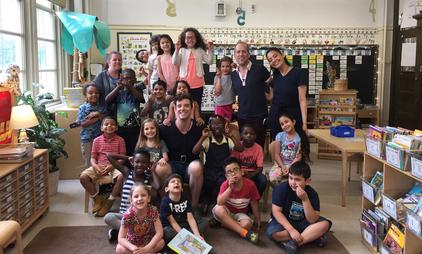