I don't remember Shakespeare making an appearance in my childhood.

I vividly remember Piglet and Pooh, Laura and Mary Ingalls, and Curious George and the Man with the Yellow Hat but I have no recollection of Romeo and Juliet, Hamlet and Ophelia or Beatrice and Benedick. They didn't appear in my consciousness until I started acting in my teenage years.

Does that matter? Is that important? I guess that depends of your perspective.

Linda Ronstadt says she cannot sing anything with authenticity that she hadn't heard before the age of ten. It was the varied musical influences of her youth that fueled her interests as a professional singer. If it wasn't played - or playing - in the family living room all those years ago there was a disconnect that left no space for comfortable familiarity, so music outside of those parameters felt false if attempted.

I felt that way about the Bard. In college I was cast in Shakespearean roles but found no joy in them. I hated the overwrought overacting of my fellow fledgling performers as they attempted to sound exactly like their idea of Shakespeare. To me, they sounded phony, pretentious, and boring - acting students full of themselves with a "look at me" attitude that was disconnected from feeling or urgency.

For my part, I felt the fool because I'm not British! And I thought the only folks with any claim on these roles were the blokes across the pond (I had a lot to learn). I never lasted. I dropped out of Henry V and Romeo and Juliet (although I would have stayed if cast as Paris, the only Shakespearean role with which I felt an affinity).

In retrospect, there must have been quite a large number of young actors who were unacquainted with Will in their childhoods - either that or they were just terrible actors. It took Shakespeare in Central Park, love affairs with Sir Laurence Olivier and Kenneth Branagh, and lots of exposure to finally let me see the joy and ease of the plays for the people.

So, to answer the question above, not meeting Shakespeare in my childhood did matter. It was important in my case. Childhood introductions to the Arts, in all forms, is always important.

I had all of this in mind as I prepared my first graders for a Broadway Books First Class guest artist visit from actor Jeremiah Maestas. Jeremiah's resume is chock full of Shakespearean roles. He's performed in Macbeth, Much Ado About Nothing, Romeo and Juliet,and As You Like It (among others). He has a comfort and connection to the material that welcomed my young students into the words and works of Shakespeare. Jeremiah introduced my first graders to William Shakespeare and therefore, set the stage for them to find comfort and a sense of ownership in his words.

He also introduced the children to a book he loved when he was a child entitled "There are Rocks in my Socks!" Said the Ox to the Fox written by Patricia Thomas. This was another first for the program. It marked the only time a performer has suggested reading a book (other than one that he or she has written themselves). Although I always ask, I usually - and happily - select them.

Again, it was those childhood connections that created a space from which Jeremiah was able to invite the children into his memories of when he first heard the book. He described himself as a Colorado farm boy at a school book fair listening to the librarian skillfully play with language - the rhymes, the silly words.

He was drawn into the rhythm of her storytelling that seemed so relatable to his own experiences with animals. That feeling of laughter and familiarity wrapped in a straightforward message about "not making things too complicated when you have problems in your life" was one he wanted to share. And those happy memories had the desired effect of drawing the children into this adventure - such is the power of setting the stage for reading with honesty, love and delicious anticipation.

It didn't take long - the first page, in fact - before the children were on their feet to get a closer look at the book. This read aloud quickly became a dialogue as Jeremiah stopped to highlight the illustrations or ask questions to push their thinking. Several times he even had them recount the events, which works well with our first grade learning objectives.

Typically, I steer clear of rhyming books because it always seems something gets lost in the translation from English to ASL. Through the years though I am learning that it is a mistake to eschew authors like Dr. Seuss and others who play with language in inventive ways. I was once again reminded of this as I watched the ASL interpreters create parallel explanations of each sentence through visual referencing in space. Even without the rhyme you can retain the whimsy and the message. And I was reminded again that it is not my right to edit or remove anything from the eyes of my students simply based on hearing status.

After the reading we returned to Shakespeare. The children asked, "What was your favorite Shakespeare play to perform and why?" Jeremiah told them one of his favorites is Macbeth ("a little bit of a scary one"), which he performed at Lincoln Center. That, along with A Midsummer's Night Dream, for its magical elements, are nearest and dearest to his heart. He had them at scary and magical! One student asked if he could subscribe to Shakespeare on YouTube!

His visit brought home to me the great privilege and responsibility educators and parents have to introduce art, music, theater, dance and stories to our children. Creative expression, individualism, and magic reside there - places that become harder to reach as we grow up.

Thank you Jeremiah for a wonderful visit! 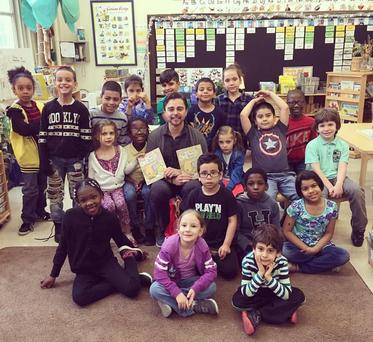 A Visit with Jeremiah Maestas