A Visit with Eden Duncan-Smith 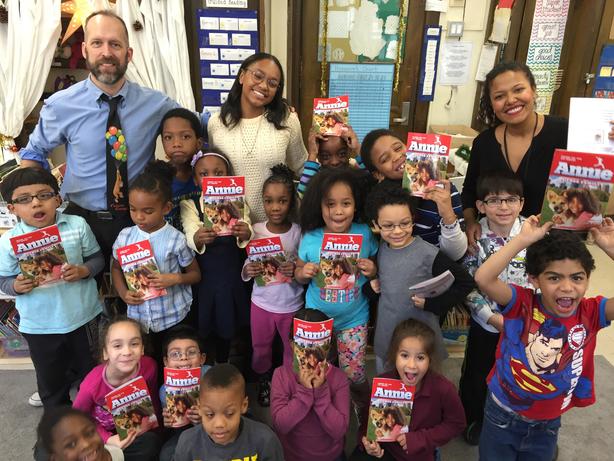 Where do you start?
How do you separate the present from the past?
With bits of memories scattered here and there,
I look around and don't know where to start.*

I feel a little like that right now - Where DO I start? How can one post capture the layered emotions of a dazzling homecoming, a full circle moment celebrating positivity in education and spirit?  I suppose like any good musical theater aficionado I should "start at the very beginning, a very good place to start".

Eden Duncan-Smith's Broadway Books First Class visit had the school community abuzz with excitement. This was because Eden attended our school from kindergarten through fifth grade and was a student of mine when she was in first grade ten years ago.  When the thought of this project came about I immediately thought of Eden who entered into her first Broadway show, Fences, while with us. Soon afterwards, she went on to star as Young Nala in the spectacular broadway extravaganza Disney's Lion King.  Last year she starred as orphan Isabella in the movie Annie (2014) with other movie roles sprinkled throughout 2015.

Thankfully, Eden is very enthusiastic about giving back to the community and supporting literacy/arts programs in schools.  Her loving mom, Nicole, encourages Eden's acts of kindness and helped coordinate this visit.

I loved showing my current class of first graders pictures of Eden from when she was in first grade.  I also had a copy of a "small moment" story written by a young(er) Eden about the time she attended a pageant.  Sharing these visual memories was a powerful way to build connections between Eden and the children.  We wanted to send a strong message that they can ALL achieve astounding things in any field if they can dream it and work to make it happen.

The notion of working towards a goal became an underlying theme. Students asked Eden how she juggles going to school with her hectic professional life.  In short, it ain't easy!  It requires dedication and tenacity.  They also wanted to know about The Lion King and, of course, Annie!

We watched snippets of the movie before Eden's visit and you can bet your bottom dollar these little Annie fans wanted to hear all about it.  Eden gracefully answered questions and even sang a bit of that  heartbreaking ode to optimism Maybe.  That, in turn, prompted the students to spontaneously break out into a chorus of It's a Hard Knock Life.

Eden read Annie: A True Family alongside our exquisite American Sign Language interpreter Mary Grace Gallagher (although Eden signs herself). The children were excited to see that Eden was pictured in the book.  Afterwards our Parent Coordinator, Terry,  had a little surprise from our Parent Association.  Terry happily handed out copies of the book and Eden wrote a personal message for each student.

After many hugs and smiles it was time to say goodbye - for now. To borrow (yet another) lyric from a Broadway musical, this visit was measured in love.

*Lyrics from Where do you Start? by Alan and Marilyn Bergman