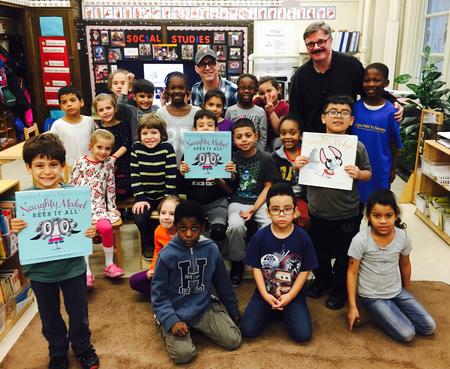 A Visit with Devlin Elliott and Nathan Lane

I used to love rainy days when I was growing up. Those dark, comfortable afternoons brought a fresh, earthy scent wafting on the breeze through our open windows. I couldn't go outside to play with my brothers and sister so we would happily occupy ourselves inside with board games, coloring books, toy cars and our imaginations. Eventually, I'd slip away to find some blissfully snug spot and read.

Those comforting memories often revisit me today when I'm in my classroom with the rain tap-tap-tapping on the playground outside our window. That long ago feeling of cherished togetherness and safety returns to envelop me and my first graders.

It was one of those stormy, relaxed days when we curled up with Devlin Elliott and Nathan Lane's latest book Naughty Mabel Sees It All.

What could be better on a rainy day than welcoming the visiting authors into our peaceful space to share the latest antics of their darling, Mabel?

Tony Award nominated producer - and charmer - Devlin Elliott is a returning guest to Broadway Books First Class. He visited during the first year of the program and happily accepted my invitation to come back a second time. This time he brought Tony and Emmy Award Winner Nathan Lane.

Nathan famously voiced Timon, the meerkat, in Disney's animated blockbuster The Lion King. That tidbit was not lost on my excited first graders who relished the thought of meeting the man behind Timon. We sang and signed our hearts out to "Hakuna Matata" and "Circle of Life" in preparation for our guests.

In fact, we did quite a lot to prepare for our visit.  We learned about Nathan's job as a stage and film actor. We came up with a list of questions about the role of a producer, how actors and producers work together and about favorite roles and memories.

Devlin and Nathan did some preparation too. In addition to carving out the time in their busy schedules, they also generously offered to provide each child in the class with his or her very own copy of their book!

After introductions, conducted strictly in American Sign Language, we focused our attention on an energetic French bulldog named Mabel, whose ocular mishaps lead to a visit to an "optimist, an optopotamus, an op-tha-mo-lo-gist...Oh, you know, the eye doctor".

Nathan Lane masterfully read the book, stopping periodically for children's questions or simply to laugh amusedly at their quirky commentary. Devlin encouraged playful interaction during the reading to allow for close inspection of Dan Krall's illustrations. Also, never underestimate the humor inherent in a character passing gas (sound effects - as Devlin and Nathan know - only elevate the hilarity).

Naughty Mabel Sees It All is a children's book, yes, but like the best children's entertainment it is also chock full of references to keep the adults interested. I ask you, how many children's books hilariously reference Bette Davis as a wide-eyed, slightly off-her-rocker Baby Jane Hudson?

A very lively round of questions and answers followed the reading. We learned that producers generally do not really have much direct interaction with performers, except perhaps on opening night if the show goes well.

Nathan shared that of the many plays and musicals he's performed on Broadway his favorite tends to be whatever he is doing at the moment. He explained that he is currently performing in The Front Page and quipped, "It's about the newspaper business, which I'm sure you'll be fascinated by" (decidedly not a show for children). His "for young audiences" description of his character in the show, Walter Burns, who is a "ruthless, not-so-very-nice man" had the adults chuckling. He went on to explain that he likes to play the "mean guy" because they are always the most interesting and "do not see themselves as mean because they think they have a good reason for what they do".

Devlin taught us about a producer's job in a nutshell; "Find the show, raise the money and know when to close".  Also, that having passion for a project is both satisfying and fulfilling. He is currently producing an innovative show called White Rabbit Red Rabbit.

We concluded the visit with gifts.

Devlin and Nathan signed copies of Naughty Mabel Sees It All for each child before biding us adieu. And that brings us back full circle to the purpose of their visit in the first place, which is to celebrate literacy and the Arts and to encourage more children to enjoy a good book on a stormy day. I couldn't be more grateful!