A Visit with David Caudle, Scott Cohen and Anastasia Traina

Surrounded by young children I've watched some very hungry caterpillars prepare for their time in the chrysalis and then breathtakingly emerge in bursts of color. I've nurtured and protected these tiny, tenacious creatures from small, overzealous hands eager to touch. And I've anticipated the quick, swiping, dance-like movements of a five-year-old whose body language reveals a reluctance to actually having a butterfly land on him.

It's clear that artist Anastasia Traina also studied the movement, stillness and shifting nuances of these expressive creatures to create her exquisite watercolor illustrations for the children's book Bitsy the Heaviest Butterfly & Raff the Tenderest Reed written by David Caudle.

The story is a beautiful lesson in overcoming naysayers, challenging misconceptions and celebrating the warm embrace of friendship. So, when David and Anastasia agreed to share this special book with my students as part of Broadway Books First Class, I was overjoyed.

We were also honored to welcome charming - and popular - actor Scott Cohen! Scott read the book to the children while we all got lost in the world David and Anastasia created. The children questioned, laughed, commented and applauded throughout the reading while getting cozy on the rug as if Scott, Anastasia and David were old friends.

The reading was followed by questions. The children wanted to know why David wrote this book. His answer was reminiscent of what Charles Busch shared when asked what gave him his creative spark, which I find interesting since both are playwrights. Is there a common thread running through the psyche of those who write scripts?

David said that he was interested in the juxtaposition of something light (a butterfly) carrying around the weight of despair and loneliness thereby becoming something "other than". Bitsy is about the transformative power of finding someone special to laugh with, to feel safe with, someone who gives us strength and allows us to joyfully become our authentic selves. It's what Charles described as finding that tribe or group of people in his life who understood him and inspired him to create.

Throughout the visit I was struck by how this generous trio listened. They were still and silent when others spoke. They were interested and thoughtful. After they left I started to wonder if I am spending too much time with the wee ones who routinely cut one another off in conversation and display other outward manifestations of a short attention span. It was a striking difference and I think I learned from them too.

The visit ended, as always, with gifts. Usually we all sign a copy of the book for the performer(s) but as this was the first time a visitor had actually written the book that was read, we had to give it some more thought. It was decided that we would use simple materials to make a child's tribute to Bitsy and Raff.

After lots of hugs and goodbyes Anastasia, Scott and David quietly flew off towards other adventures but left behind a charming story and a message we will revisit again and again.

So, the next time you see someone different from you,
Don't make fun as the others in your pond might do.
Make friends instead, and you'll have the last laugh,
Find strength in each other, like Bitsy and Raff. 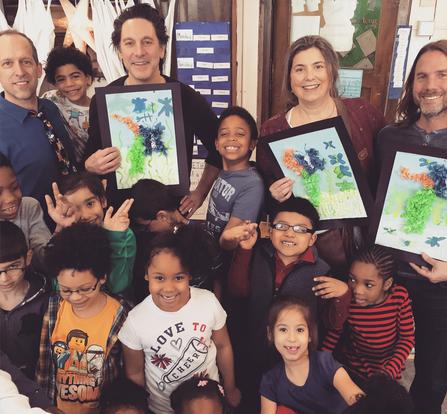