Stockard Channing first sauntered into the landscape of my adolescence as Betty Rizzo, leader of the Pink Ladies in the movie musical Grease.  I could not keep my eyes off this beautiful, feisty and secretly sensitive soul as she navigated high school and belted out catchy tunes.

It was the summer of 1978 and that September I would enter high school myself.

Who knew it was going to be such an adventure?!

On the first day I drove up to school with my older brother - a senior - and as we got out of the car I adjusted my sunglasses, gave him my cool Rizzo look, smirked and said, "We're gonna rule the school"

Then, he pushed me away and said, "Don't walk with me!"

Still, I kept the "Let's go get 'em" school spirit and channeled my inner Riz until graduation.

Over the next few years I followed Stockard Channing's career closely from her 1979 television series Just Friends to Broadway and ultimately to Silent Victory: The Kitty O'Neil Story.  She played a woman who is deaf and struggling to find independence.  Again, I was fascinated.  I sought out sign language classes and taught myself the handshape alphabet.  A seed had been planted that would later grow to impact the course of my life.

In 1986 - I was now a performing arts major at NYU's Tisch School of the Arts - Stockard Channing was appearing at the 92nd Street Y in Three Verse Dramas by William Butler Yeats.  After the performance I went backstage to meet her.  She was lovely.  I was probably a bit much.

In the years that followed I changed course - from actor to teacher - and found my true purpose.  Stockard went on to win a Tony Award (six nominations), two Emmys, and an Academy Award nomination for Six Degrees of Separation.  Her interest in Deaf culture continued as well and in 2007 she narrated the PBS documentary Through Deaf Eyes.

So, it should come as no surprise that when I created Broadway Books First Class Stockard Channing was at the top of my list. A chance meeting - set up by the universe - with Kim Weild put the dream in motion and Voila! One afternoon in December Stockard Channing paid a visit to my first grade classroom.

She read Todd Parr's Be Who You Are with an exquisite intensity incorporating gestures, signs and the perfect touch of gravitas. The children joined in on the repeating refrain, "Just be who you are!"

As she read she delighted in the kids, stopping to listen to their comments and acknowledge their insights.

As a skilled actress she took her cue from them to explore interesting concepts (e.g. feelings, food) and highlight certain illustrations.

Once again I had a front row seat to a master class and it was all unfolding in my very own classroom.  Although it was somewhat surreal, the awesomeness was not lost on me for a moment.

The children learned about her work before her visit and after the reading were very eager to ask her about her roles in The Girl Most Likely To... and in any show she performed with the name Joey in it (e.g. Pal Joey, Joe[y] Egg) because we have our very own first grade Joey.

Our questions brought forth some fantastic stories and information.  We learned...

​Before she left she sat down to autograph copies of Todd Parr's book as I chatted with her about varying perspectives on deaf education (she prepared for her visit with us by reading Deafness by David Wright), theater and books.

I've heard it said that we should never meet our idols because it is nearly impossible for them live up to our expectations and inevitably we are left feeling disappointed. This was far from the case with Stockard Channing.  She could not have been more open, patient and giving with the children and extremely generous to participate in the program.

To paraphrase the last lines from Willy Wonka and the Chocolate Factory, "What happened to the man whose dreams suddenly came true?  He lived happily ever after!" 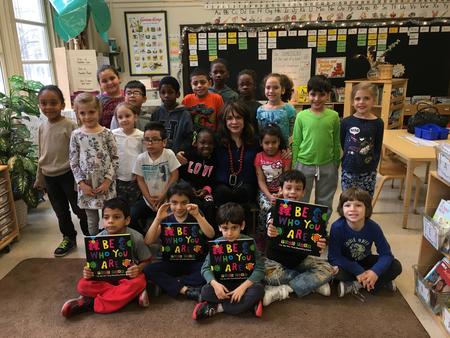 Stockard Channing surrounded by the students in First Grade

A Visit with Stockard Channing