I am an unabashed theater fan. I've spent many hours watching performers strut their stuff upon the wicked stage and never more so than with the spectacularly talented Alison Fraser.

Through the years I came to regard her as a friend - long before we actually met - while sitting out there in the dark watching one brilliant performance after another in Gunmetal Blues, Dedication or The Stuff of Dreams, The Divine Sister, A Charity Case, Gypsy, Love Therapy, First Daughter Suite, plus cabaret and concert performances.

So, when Alison accepted my invitation to join Broadway Books First Class I was thrilled.

The search for the perfect children's book began. I discussed possibilities with Kirsten Hall at Catbird Agency and she recommended a newly published title promising to become a classic. The Night Gardener by The Fan Brothers (Terry and Eric) recalls the enchanting magic found in The Secret Garden and encapsulates an inspiring theme.  Each of us can create something extraordinary and the beauty we create can, in turn, change people forever.  We are all agents of the unforgettable when we share our gifts.

The class spent the week prior to Alison's visit talking about her work.  This included...

1.  Playing her ode to fortitude "Hold On" from The Secret Garden while my team teacher Oni beautifully interpreted it in American Sign Language.

2.  A couple of six-year-olds adorably reenacting the meeting of Pepi and Alfred strolling down the Alserstrasse in Romance/Romance.

When the time finally arrived Alison gleefully entered the classroom as "I'll Always Remember the Song" played in the background.

Introductions were made and Alison settled into the reading. As a teacher this provided a fantastic opportunity to sit back and watch the children's reactions and comments, reflect upon what they noticed and become wowed once again by their brilliant little minds. As a theater lover it was a front row seat to the best show in town watching Alison take the story to unexpected places with her skillful interpretation.

We followed the reading with a series of questions.  We learned that Alison wanted to become an actress to tell stories and that she used to sing along with her record albums growing up (the kids weren't particularly familiar with vinyl).  Her favorite roles on Broadway were in the shows Romance/Romance and The Secret Garden.

Next, we gave her a copy of The Night Gardener (signed by all of the children). She graciously accepted a child's request and sang "If I Had a Fine White Horse" from The Secret Garden while handing out pieces of ribbon and wrapping from her gift.

As a last surprise, she distributed copies of the book to each child courtesy of The Louis Valentino Jr. Memorial Fund and autographed each one! Her written message encouraged the children to keep reading, which is the whole point of Broadway Books First Class.

All in all it was another very successful visit by an incredibly talented, generous and beautiful performer. 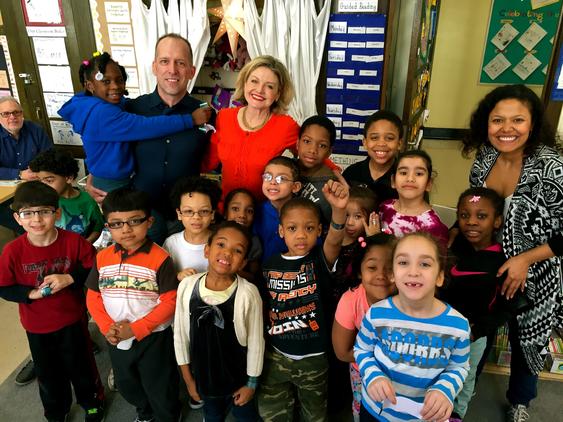 A Visit with Alison Fraser