For a time we were all gentleman in top hats thanks to our charismatic ringleader, Tony Award Nominee Bryce Pinkham

The performers who find their way to Broadway Books First Class are an exceptional lot. That should come as no surprise. It is a special someone who readily spends an afternoon with a group of young children to share a story and make them feel important.

Bryce Pinkham, who kicked off the second year of my little program celebrating literacy and the arts in New York City, certainly has a gracious spirit and a generous heart.

For anyone lucky enough to see Bryce in A Gentleman's Guide to Love and Murder, or even catch his performance on the Tony Awards, his humor and talent are evident. It was those qualities, coupled with his penchant for community service that sent Bryce to the top of my visitor dream list.

Bryce is cofounder of an outreach program called Zara Aina (Share Life!).  Zara Aina is "an organization that provides under-privileged students in Madagascar with school supplies and instills self-confidence through the art of theater".  Their mission aligns with the vision of Broadway Books First Class, so I hoped Bryce would accept the invitation I sent to the stage door of the Walter Kerr Theater last November.

In true gentlemanly fashion Bryce responded with a handwritten note stating, "I would love to come join you guys at Broadway Books First Class after Gentleman's Guide closes".

And so he did!

I prepared the students beforehand by showing them pictures of Bryce and discussing some of the roles he's played on Broadway. His youngest fans were very intrigued by the escapades of his Gentleman's Guide character Monty Navarro as well as his energetic performance in his current show, Holiday Inn (the show runs through the middle of January 2017).

We also came up with a list of questions to ask him about his life growing up and his passion for theater and helping others. We rehearsed our introductions and made top hats in his honor (as an homage to his gentlemanly inclinations). When he arrived we gifted him with his own collapsable top hat, which he graciously wore throughout the visit. What a guy!

Bryce read Be A Friend by Salina Yoon. It is a sweet story of a self-proclaimed "Mime Boy" named Dennis who expresses himself in extraordinary ways. His path is a lonely one until he eventually finds a friend who shares the gift of imagination. Together they teach others that the world is more than what we see. It is also what we can create. We can generate endless possibilities if we can only imagine.

Bryce, a storyteller himself with a vast imagination, sprinkled his reading with exercises designed to engage his young audience. He showed them how to "climb a ladder" and "walk down the street" like Dennis.  A little girl shouted as he walked effortlessly in place but seemingly forward, "That's cool! It looks like the carpet is moving!" And it did!

Throughout the reading the children giggled, gasped, interjected, observed, commented and asked thoughtful questions. They made connections, shared their experiences and knowledge and traveled with Bryce through each page. The energy and joy in his interactions with the children were palpable.

Afterwards, Bryce taught them a mirror exercise, which has become a popular activity ever since. He explained that it requires, "Concentration, listening and team work. Three things you have to have if you want to be on Broadway. Concentration, the ability to listen and the ability to be a team player".  It's also a recipe for success in first grade.

After the reading we asked Bryce some questions beginning with, "Is it cool to be in Broadway shows and why?"

"YES!  It is so cool. Every night I get to do what I love. I get to sing. I get to perform and I get to make people laugh. So, performing on Broadway - for me - is me following my dream. When I was your age I wanted to be on Broadway. So every night I go out there I'm very grateful. But it is also really cool because I get a chance to come meet tons of different types of people, like you guys. I would never be here if I hadn't been on Broadway.They also asked him about Zara Aina and he gave his account of arriving in Madagascar to meet a group of children like them.  He explained how they communicated through gesture and the language of laughter. And our children seized upon the opportunity to teach Bryce some American Sign Language."

Our time with Bryce was coming to a close so we presented him with one final gift, a copy of Be A Friend signed by every student. Bryce returned the favor by tirelessly signing copies for all of us.

As he gathered up his things the children surrounded him. They asked for one more mime exercise, "Can you lift something heavy?" He obliged by teaching them how.

All good things must come to an end. Bryce made his final goodbyes and after many hugs from the children we made our way down to the lobby. While we walked he wondered aloud how he could do more for the kids and how he could provide more support for Broadway Books First Class.

And my mind wandered back to the book.  Only this time I saw it a little differently...

"Bryce was an ordinary man who expressed himself in EXTRAORDINARY ways." 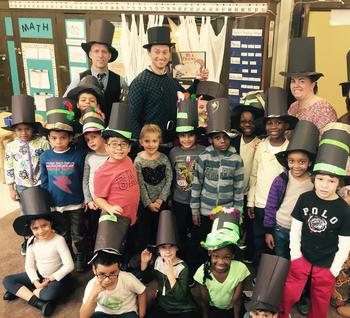 A Visit with Bryce Pinkham