The dreams of childhood quietly nestle within the protective care of possibility. With youth comes the optimistic projection that the future is "a blank page or canvas" awaiting our direction.

What is your dream?

Who do you want to be when you grow up?

These are questions adults ask little ones while encouraging them to open their hearts and imaginations to what lies ahead.

Dreams - and the quest to achieve them - were the theme of our Broadway Books First Class visit from two-time Tony Award nominee Mary Testa. Mary represents the successful manifestation of the Broadway dream beginning with her debut on The Great White Way in 1982 in the musical Barnum. That was followed by Tony Award nominated roles in On the Town and 42nd Street, in addition to parts in beloved musicals Wicked, A Funny Thing Happened on the Way to the Forum and Chicago.

However, the first time I remember seeing her perform was as the fiery muse - and daughter of Zeus - Melpomene in Xanadu! She was intense and funny and I was drawn to her boundless energy and a little frightened by its manic unpredictability. Then, years later, I watched her quiet, heartbreaking portrayal of Barbara Bush in First Daughter Suite at the Public Theater.

Those performances demonstrated that she was equally adept with both animated hijinks and sustained compassion, so when she stepped into my classroom to meet the children I knew they were in good hands.

It turns out Mary knows some American Sign Language (ASL) and even has a name sign given to her by Tony Award winner Phyllis Frelich (Children of a Lesser God)!

After introductions, Mary led the children into The Darkest Dark written by Astronaut Chris Hadfield and illustrated by The Fan Brothers. The book recounts Chris' childhood in the 60s where his desire to explore the universe had a hitch - he was afraid of the dark. This changed one night in 1969 when he gathered around the TV with a crowd of adults and children to witness intrepid astronauts landing on the moon. That night Chris realized that you are never really alone in the darkness (in a good way).

"Your dreams are always with you, just waiting.  Big dreams, about the kind of person you want to be. Wonderful dreams about the life you will live.  Dreams that actually come true."

Facing challenges and overcoming fears is a step on the path to achieving our dreams. To paraphrase Joseph Campbell, the hero's journey is never easy but it is always worthwhile. And we are all certainly the hero of our own story - or dream - aren't we?

During the question and answer period Mary's determination, joy and empathy were on full display. When asked to share one of her favorite theatrical memories she related the story of meeting a boy after a performance of 42nd Street. He had come to see the show as a brief respite from the pain and exhaustion surrounding the illness of his father and thanked Mary for giving him those precious hours of happiness.

He returned a few months later with his mother after his dad had passed to thank Mary and the cast for giving them some happiness during a difficult time. As she spoke, Mary began to cry and the children commented on it, asking why? In that moment she helped them understand the power of theater and the heart of an artist.

...And made my dreams for Broadway Books First Class come true, which is to set the stage for my students to become smart, caring adults who appreciate literature and the Arts. I want my students to emulate Mary Testa. She is a beautiful role model.

Mary shared more stories and thoughtfully answered more questions about her favorite performance (in Queen of the Mist, which was written for her by Michael John LaChiusa) and most embarrassing moment on stage (going up on her lines in 42nd Street when her sister was in the audience after performing it for more than a year).

Her stories stayed with the children, as did her lesson on the importance of collaboration in the theater and in school. Her words and lessons come up every so often in various ways but most recently in our poetry unit.

It has been a few weeks since her visit yet one little girl wrote a poem in Mary's honor.

Mary's visit showed a group of first graders that dreams can come true and that when they do it is best to live in them with grace and gratitude. We all send a big hug of thanks to Mary Testa and look forward to seeing where her dreams lead next. 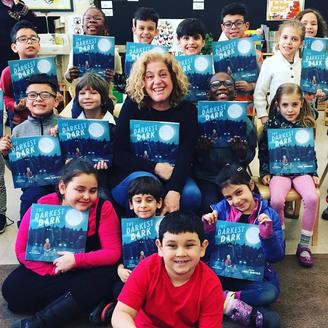 A Visit with Mary Testa