A Visit with Hollie E. Wright

Children and movement - they seem to go hand-in-hand.  Little bodies squirm, wiggle and fidget.  How wonderful it is to direct that energy into a form of creative expression.

Our second Broadway Books First Class visitor gave us the incentive to do just that!

We set the stage for Hollie Wright's visit by taking our first grade class to Lincoln Center to see Ballet Hispanico perform dynamic choreography to the music of Celia Cruz, Tito Puente and Xavier Cugat.  The dancers celebrated the captivating aesthetics of Hispanic culture in solo, paired and group numbers utilizing space and time to great advantage.  This performance generated questions for Hollie including, "Do you dance alone or with someone?" and "What kinds of dancing do you do?"

We also read books about dancers - check out the soaring Firebird by Misty Copeland - and began a Latin Dance class ourselves through New York City's Town Hall.

The books brought another question to mind, "Why do dancers dance in pointe shoes?"  In general, dancing shoes were an area of curiosity so I asked Hollie if she could bring along some shoes for the kids to explore.

She happily complied by bringing ballet slippers, Pointe shoes, character shoes and tap shoes.  She even gave a command performance by tapping splendidly on our tile floor and later, leading the students in a series of stretches.

But, before all that happened she read.  We chose Dancing in the Wings by Debbie Allen (interesting side note: Hollie understudied Debbie Allen's daughter Vivian Nixon in Hot Feet on Broadway).

Hollie gathered the children around her on the rug and read the story of Sassy who dreams of becoming a dancer.  Throughout the reading Hollie paused to ask and answer questions, show pictures and comment on the story.

Like Gregory Jbara before her, we noticed Hollie knew how to gauge the reading to keep little bodies with short attention spans engaged.  After the reading I commented on this only to find out she has a degree in education and is experienced in teaching young children.

She has been dancing since Age 2 and has been taught by the best (Maurice Hines!).  She also enjoys a long association with The Alvin Ailey American Dance Theater School. She is in demand but for a while she chose to spend time with us.

I am thankful I met this bighearted performer that hot summer night in early September outside the theater of her Broadway show Amazing Grace. Her visit was inspiring.  Who knows?  We may have a future dancer in our midst! 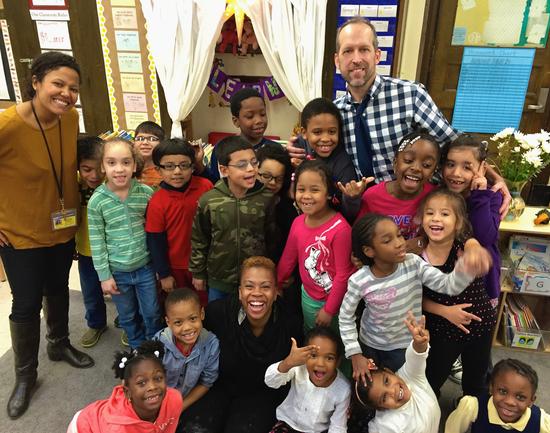 Joyous Broadway dancer Hollie Wright (seated) with our first grade students.
Notice the girls on the right signing the letters "H" and "W" for her name.