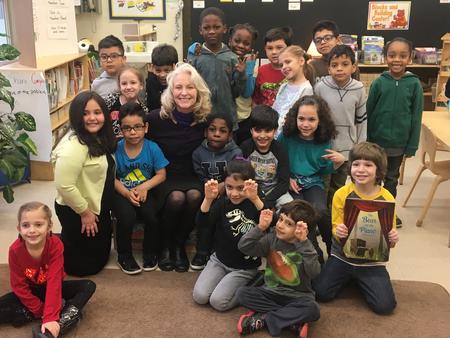 A Visit with Elizabeth Ward Land

"Some combinations of words, miraculously, arouse intellectual curiosity, and that is the real magic performed by childhood books."

Books, like theater, usher us into new experiences through the power of words.  Storytellers have been sharing ideas and imparting lessons from the fireside for generations.  Under the spell of those wondrous words children adventure outside their experience and become empathic observers.  In the long tradition of welcoming the troubadour's song Broadway Books First Class whisks children away to new lands and gently carries them home again.

That was the message from Broadway veteran Elizabeth Ward Land when she visited first grade this month.  She read The Bear and the Piano by David Litchfield to a rapt audience of 6-and-7-year-old children.

It's a story of longing to "explore the world beyond" and the struggle to stay connected to your roots, your heart.

That is something our guest knows something about.  As an actress and singer Elizabeth has performed in many Broadway and Off-Broadway shows, National Tours and concerts.  Our paths first crossed during her run in City of Angels as I sat "out there in the dark" watching and listening.  They crossed again in The Scarlet Pimpernel (she was in all 3 Broadway versions and I saw every single one) and finally in Amazing Grace the Musical.

However, it wasn't until Broadway Director (and BBFC alum) Kim Weild assembled a talented group of performers for Broadway Holiday that I met Elizabeth in person.  During that fundraiser she sang "My Grown Up Christmas List" while I signed.  We hit it off splendidly and I knew she would enrich the lives of my students by surrounding them in words and music.  How wonderful it is that she accepted my invitation.

In addition to the reading, Elizabeth sang us the first song from her mesmerizing CD First Harvest.  It was one of those "you could hear a pin drop" moments as she sang, "There's been a change in me..." beside our ASL interpreter who ensured that all of the children understood the message of the song.

Once she concluded, the class erupted as the children stood and threw their hands up to applaud or holler approval.  It was a spectacular moment filled with happiness and appreciation.

As always, we asked her some questions about life in the theater. The themes of the shows she's performed gave the little ones quite an education.  In preparation for her visit we learned about the French Revolution and "Madame Guillotine" courtesy of The Scarlet Pimpernel and Amazing Grace led to a discussion of slavery and the transatlantic slave trade.

They found the guillotine most intriguing so naturally their first question was, "In the show The Scarlet Pimpernel how did people get their heads chopped off?"  That question recalls the somewhat dark purpose of children's books in the first place, which was "navigating a child's fears about sleep as a prologue to death" (Tatar, 2009, p. 97).   There is a reason children are fascinated with darkness and death - it is part of growing up and accepting our mortality.

Elizabeth walked them through it unscathed and moved seamlessly on to their next question, "How did you learn to sing so good?"  She shared her tale of vocal lessons and the musicality instilled in her by her mother.  Elizabeth plays the piano, oboe, percussion, guitar and a little ukulele.  Those talents were on display when she performed last year at The Public Theater in Southern Comfort.  And with that we broached another topic - transgenderism.

The eventful morning ended as it began - with a celebration of words.  We gifted Elizabeth with a copy of the book signed by all of the children and in return, she signed copies for each one of them.

THANK YOU Elizabeth Ward Land for making a difference in the lives of these children, treating them with respect, teaching them about diversity and acceptance, for your words and for your glorious singing!

As Wordsworth put it: "What we have loved/Others will love, and we will teach them how"