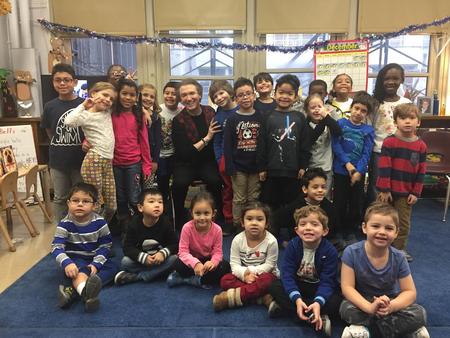 A Visit with Charles Busch

The divine Charles Busch discussing creativity, self-expression, friendship and, of course, false eyelashes with students in Pre-K and Second Grade

There are a few things I've come to learn about playwright, performer and Drag Legend Charles Busch.

He is terribly clever. He delivers a line like nobody's business. He can command a room with the slightest movement. And his heart is as big as Susan Hayward's performance in I'll Cry Tomorrow.

All of this makes him a perfect fit to entertain and enlighten a classroom of elementary school children. The juxtaposition of bravado and tenderness plays well with young children who are required to navigate the complex social structures of school. This is when they build friendships, not always based on commonalities but predicated on necessity, proximity or boredom.

Charles understands that childhood can be tricky and that sometimes it takes a while to come to terms with who we are and what life has placed at our feet. These are not always things we speak about directly but this is where the term "being a role model" comes into play. We teach by example. We listen. We see. We acknowledge. We let children know they'll find their way through it all because we are living proof.

This is the second time Charles joined Broadway Books First Class as a guest artist. The first time he read the cautionary tale The Spider and The Fly and shared stories with my first graders. This time he visited with some pre-k and second grade students to read Unlovable by Dan Yaccarino. Unlovable tells the story of a pug named Alfred who is teased mercilessly and called "unlovable" until, one day, he finds someone just like him. In the book it is another pug but the message, of course, goes deeper. The book selection was inspired by the question-and-answer session Charles had with the students during his first visit.

Charles wrote about that visit on Facebook and has graciously given permission for me to include a bit of it here.

"One of the children asked me when I started acting and writing. I explained that it was around their age. I told them I had a rather lonely childhood and always felt different from the other kids and when I was grown up I found a group of friends who also felt alone and different and we formed our own group.  Each person was so interesting and unique that I was inspired to write parts for them to show how wonderful they were and we put on plays together. For the first time in my life, I truly had friends who wanted to play with me and people came from all over to see us. They got it."

The children got it this time as well. I am always curious how the reverberations of these visits will play out in a child's life.

And like last time, the children were fascinated to learn how Charles uses makeup to create the look of his female characters, such as Irish O'Flanagan in Times Square Angel.

At the children's request, Charles brought along some false eyelashes, a bangle and a boa. Charles performed a little mini-transformation right before our eyes and afterwards got down on the floor with the children and shared the goods.

Before long there were giggles and guffaws as the false eyelashes became a mustache, a beard and even a third eye. The children seemed to understand his explanation about why he performs the female roles in his plays - it is a way to step outside of himself to find freedom of expression (although these days he is becoming more comfortable performing the male roles).

After all, how is it any different from the boy in my class who comes in every morning and puts on the police uniform? Children understand the need to step into other roles, to become someone other than themselves for a time whether it be to work out their place within familial power dynamics (e.g. playing mommy and telling others what to do), societal power dynamics (e.g. a cop giving a ticket or arresting someone) or playing out relationships they want to be true (e.g. "You are my sister").

All of these manifestations are like musicians playing the same song but with different pitches and chords.  And that is where we learn to embrace diversity and play in harmony with one another. We are more alike than we are different but our differences should be celebrated.

As we handed out copies of Unlovable - signed by Charles - the children sat on the rug to read alone, in pairs or in small groups. Some mimicked the way Charles gave life to the characters and even asked him to read parts again.

Others had more questions or wanted to practice his name sign. Charles describes it as such, "For Charles I make a C with my hand and cup the side of my face and for Busch I pat the bottom of my hair like I'm styling it." (In Deaf culture name signs are given by someone who is Deaf or hard of hearing and, for someone who is hearing, a name signs signals acceptance into the Deaf community. Name signs are unique to each individual and relate to an aspect of your appearance or personality. Charles has an amazing name sign!)

That afternoon the children wrote out a bunch of thank you cards for Charles illustrated with eyelashes, pugs, flaming-haired chanteuses and words of encouragement and gratitude. I will end this post with one card written by Leo, "Dear Mr. Busch/Charles Busch: Thank you for everything that you did. And you can make a play out of all that. THANK YOU!!"