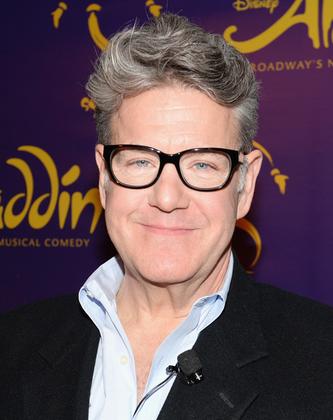 Jonathan Freeman is an American actor, voice actor, singer, puppeteer and comedian, known for puppetering and voicing Tito Swing in Shining Time Station and for voicing Jafar in Disney's Aladdin franchise, as well as the Kingdom Hearts franchise and the 2011 Aladdin Broadway musical.

In 1994, he was nominated for a Tony Award for Best Performance by a Featured Actor in a Musical for his role in She Loves Me. Additionally, he appeared in the Broadway revival productions of How to Succeed in Business Without Really Trying, The Producers, On the Town, and 42nd Street, during which his caricature was drawn for Sardi's restaurant in 2002.

Freeman can be heard on the 1997 Varèse Sarabande studio recording of the flop 1965 musical Drat! The Cat!.

He was also seen on stage as Cogsworth in Disney's Beauty and the Beast, and originated the role of Grimsby in Disney's Broadway production of The Little Mermaid.

Freeman began his run starring as Admiral Boom and the Bank Chairman in the Broadway production of Mary Poppins on December 12, 2009.

Freeman reprises his role as Jafar on stage in the new musical adaptation of Aladdin, which played at Seattle's 5th Avenue Theatre from July 7–31, 2011. He is currently reprising the role in the Broadway production, which opened in March 2014 at the New Amsterdam Theatre, and he is the only actor from the original cast of the animated film to do so.