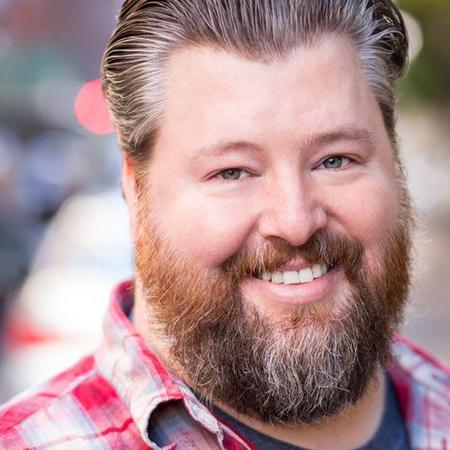 At a petite 6'3", Jason Simon is a presence! Whether he's bringing audiences to tears as the not so gentle giant Lenny in Of Mice & Men, uproarious laughter as the Cowardly Lion in The Wizard of Oz, or a richly voiced, movingly human approach of merely sharing the story of his people as the dairy farmer Tevye in Fiddler on the Roof, Mr. Simon is a stage presence to contend with!

Jason is an artistic person wholly entrenched in the creative life. In addition to being seen on stage in all 50 United States, Canada, Mexico and Puerto Rico he’s done a little bit of everything, from the more everyday jobs like bartending, driving a forklift, and welding, to his more artistic and theatrical efforts as a photographer, illustrator, designer, singer, actor, and co-owner/co-founder of the theatre group The November Ten and Festival 56.

Born in Seattle, WA, his family moved frequently along the West Coast where he attended high school in Huntington Beach, CA. After high school, Jason took the unconventional route of skipping college and instead joined the performing group The Young Americans where he studied performance, dance, and voice, and toured the country on Musical Outreach Tours helping to encourage the arts, and particularly music, in education. After trying his hand in Los Angeles he was given the advice that if he wanted to be a stage performer he needed to move out east. After a brief amount time in the New England theater scene he finally made the move to New York where his career really took off.

He’s been seen on TV, film, as a voice in both video games & animated features, and in over 70 different theatrical productions including the national tours of Funny Girl, The Scarlet Pimpernel, Cats, The Producers, The Wizard of Oz, and Sister Act. He’s appeared Off-Broadway and at some of the largest national regional theaters in America. He’s performed at Lincoln Center with the New York Philharmonic. In three productions at the Metropolitan Opera he’s had the good fortune to work with famed director/choreographer Susan Stroman and Maestro James Levine, and shared the stage with opera greats Renée Fleming, Susan Graham, and Sir Thomas Allen.

In 2014, Jason was married and he and his wife live happily in Queens, NY.

Ingredients for a Witch