ANASTASIA TRAINA (Writer / Artist) has recently sold her screenplay, Horton Bliss, to Sony with Mark Gordon and Katalyst as producers, and Ashton Kutcher attached to the project; he is set to play the main character.  She has been commissioned by Jason Kliot, of Open City Films, to write the feature film Away.  In addition to her lucrative film exploits, Anastasia has also written for television.  She wrote for the one-hour T.V. drama Street Time, a SHO original series, directed by Richard Stratton, featuring Scott Cohen and Rob Morrow.

Anastasia has written many plays and other dramatic works, too many to be written down, but to list a few:  Currently, her play The Dustman a musical fantasy is being rehearsed by the Mandragora Group; it is slated for a 2013 release in Krakow, Poland.  Anastasia’s new play entitled Seagulls on Sullivan Street had a workshop production at LAByrinth Theater’s Intensive in the summer of ‘09, and was performed at LAByrinth at the end of January, 2010.  The same play also received a workshop at the Royal Academy of Dramatic Arts (RADA) in London later that year.  Last but not least, Michael Imperioli’s, Studio Dante, produced her play From Riverdale to Riverhead during its ’07-’08 season

For those works currently in progress:  Anastasia is finishing the writing and editing of her newest screenplay, Sparticles and String.   She is at work on The Romantic Fiction of Maude Green, a stop-motion feature, and a picture book named, Effie, about an orphaned witch searching for her witchy-self. 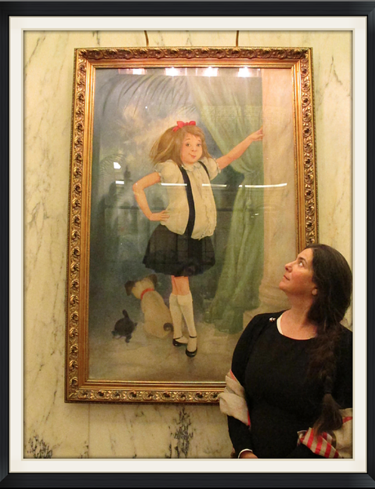